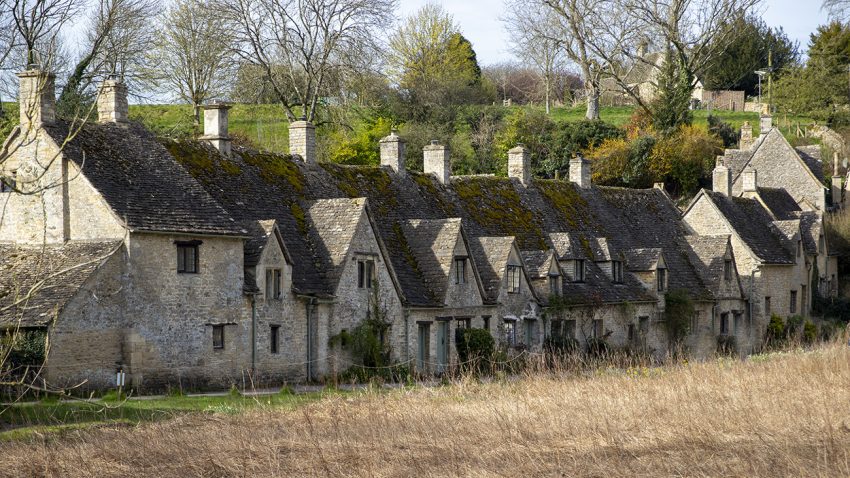 Although abundant with interesting things to see and do, the Cotswolds is a place that very quickly charms you into slowing down. There is a rural, old-world atmosphere here that evokes images of time immemorial when the skill of the craftsman was revered, and the unhurried nature of a hard day’s work was measured by the quality of the effort, and not just by the quantity produced. As you begin to explore the many picturesque towns and hamlets, winding your way through the fertile countryside in search of that quintessential Cotswolds beauty, you notice not just the overall allure of the place, but also the finer details that give this Area of Outstanding Natural Beauty its otherworldly appeal. The quaint honeyed cottages with their warm limestone walls are forever imbedded with the marks of the stone mason, and their roughly hewn edges are a testament to the generations of skilled hands that came before. In that period when things were built to last it is no wonder that a few days spent in the Cotswolds feels like an immeasurable journey back to another time.

One of the greatest joys here is to simply find oneself a little lost. There are wondrous things to experience in the Cotswolds, such as a visit to one of the many stately manor houses with their lush English gardens and historic lineage, or a traditional British lunch at one of the charming original old pubs. However, I encourage you most vigorously to wander off the beaten path and find yourself comfortably alone amongst the residential splendour and the utterly lovely meandering country lanes – because even in these days of modern tourism, it is still surprisingly easy to find oneself far from the madding crowd.

Of course, as with all popular tourism hot spots throughout the world, there are certain attractions that lure big crowds with warranted merit. In an antiquated city whose ancient artifacts lay bountiful throughout the cobbled streets, the pockmarked and irregular crumbliness of Rome’s majestic Colosseum still draws the heaviest crowds to marvel at its monumental structure. There is however a kind of personal satisfaction when straying to paths lesser travelled; stumbling upon a little pocket of the world that not every camera wielding tourist has the pleasure of experiencing. These are the moments that make us thankful for the accessibility we now have to the wider world, and the wonders that lie within it. Nevertheless, those monumental moments, those historical stories that stay woven into the landscape and remain still, after all these years, readily available for us to see, well those are always worth our time.

The Cotswolds holds its own set of rich historical links to the past, many of which can be found listed as things ‘not to miss’ when visiting. One of the most photographed destinations in the whole area, and arguably all of England, is the postcard perfect avenue of stone houses found in Bibury, a gorgeous little village in Gloucestershire built on the banks of the River Coln, a Thames tributary that trickles through the town. The river sets the scene, lending the place a romantic charm. Weeping willows, those famed storybook trees, dip their languid branches into the crystal-clear waters below like a fair maiden washing her golden hair in the passing stream.

Besides its obvious allure, Bibury is also home to a row of 14th Century buildings which were originally constructed as a monastic wool store. The attached structures are arranged along the banks of the River Coln creating a harmonious ascending sequence of moss covered slate roofs creating a scene that is the epitome of the Cotswolds allure. The process of wool manufacture during the Middle Ages was a gradual and attentive operation, and the preservation of Arlington Row gives us a glimpse into the region’s farming history. Once the wool was washed inside the buildings it was then brought outside to dry in the adjacent boggy meadow known as Rack Isle, where it was draped over racks to dry in the sun, then dispatched onwards to the nearby Arlington Mill to be processed and prepared for use.

In the 17th Century the structure was reimagined into a set of weaver’s cottages until the Industrial Revolution eventually pioneered new modernised techniques for the industry which delegated this artisanal production as obsolete. It is easy to envision why Cotswolds resident and artist William Morris was drawn to the area in the 1800’s, prompting the designer to describe Bibury as “the most beautiful town in England”. Morris was presumably charmed by the town’s ancient crafts at a time when Victorian modernity and industrialised techniques threatened to supersede these culturally significant traditions. Thankfully, like many of the country’s great landmarks and buildings, Arlington Row and its historical cottages are conserved and protected under the National Trust Association to be preserved for future generations.

When we visit, early in the morning in the hope to avoid the heaving crowds, it is early spring and the expanse of meadow which lays sandwiched between the buildings and the river, is yet to recover from its winter slumber. The dry grassy remnants of a summer past have not yet begun to reveal their hidden beauty. Although a little disappointed not to witness the meadow in all its wildflower glory, there is an unexpected and subtle beauty to be found in the way the pale golden landscape so perfectly mimics the honeyed limestone walls adjacent. The entire scene is rather mesmerising in its romantic, old-world charm and looking up from the edge of the river, with the quaint stone footbridge to my left, I visualise a painted landscape that seems perfectly executed at the hand of a 17th Century master artist.

Priority number one when visiting Arlington Row, or any other of the Cotswolds main attractions, is to arrive as early as possible. If you want to take photos without the distraction of modernity in sight, or you simply fancy soaking up the Medieval atmosphere before others descend, then visit first thing in the morning and leave the gentle, aimless meandering until after lunch. We had hoped to arrive a little earlier, but the lure of a holiday sleep in and a leisurely breakfast prevailed, and we ended up arriving after 9am. Fortunately our stay in the nearby village of Stow-on-the-Wold was reasonably close by and we made it just before a packed van of eager tourists arrived. There is a colloquial saying in Australia that there are “No flies on me” meaning there is no time to muck about, and so just like a marathon runner spurred on by the sound of the starting pistol I was off like a shot. Once photographically satisfied and becoming quickly enveloped by the burgeoning crowds we ascended to the enticing country lanes lined with darling vine covered houses with signs reading Awkward Hill Cottage and Rosemary Cottage nailed to creaky front gates.

The desire to just wander and explore this peaceful scenario was becoming a challenge when faced with the ever-increasing crowds, so we descended back into town and strolled along the banks of the river where we stopped and chatted to two fishermen in the throes of the day’s catch. Hailing from a nearby town the pair were more than happy to talk about the local trout and to proudly show off their modest haul. The nearby working trout farm has been set up to allow visitors to try their hand at catching their own trout, and to allow locals and tourists to purchase fresh fish from the farm fishery. The fishermen we met said they prefer to try their luck out on the riverbanks, where they find solace in the quieter location. Although trout has been introduced to the UK, the prized fish thrives in the mild and constant temperatures of the local Cotswolds waterways which stand at around 10 degrees Celsius all year round. We bid farewell to our new friends and leave Bibury for another popular Cotswolds destination, Bourton-on-the-Water, a mere twenty-minute drive away.

Bourton-on-the-Water is as literal as its name suggests and the pretty village in Cheltenham is gracefully divided by the River Windrush. Wandering along the water’s edge observing the succession of low-lying bridges and beautiful stone houses reminds me of our visit last year to Oxford. It is obvious why the town has earned its nickname as the ‘Venice of the Cotswolds’. Rather than the majestic Venetian Gothic palaces that elegantly flank the Grand Canal, here we find cosy stone cottages whose lovely, flowery gardens spill out along the riverbank and happily guide you along your way.

If you were ever to succumb to the temptation of the good old English tea and scones, then Bourton-on-the-Water seems the perfect spot to do so. Besides its picturesque setting, the town is home to a myriad of tea shops, historical pubs, and bakeries where you can partake in a bit of traditional British fare to immerse oneself in the quintessential scene. We settle into the riverside garden at the aptly named Bakery on the Water for what we deduce is the perfect end to a perfect long weekend in the Cotswolds; homemade raisin scones with lashings of local strawberry jam and a more than generous dollop or two of luscious, clotted cream. All washed down with a steaming hot pot of English Breakfast tea for two.

I hope you enjoyed exploring the Cotswolds with The Sunday Londoner. Please do leave a comment below, I’d love to hear from you! Have you ever visited this incredible place?

As we were leaving we were very lucky to come across a flock of beautiful new spring lambs jumping and frolicking in the sunshine. Such a lovely end to our memorable trip to the Cotswolds!