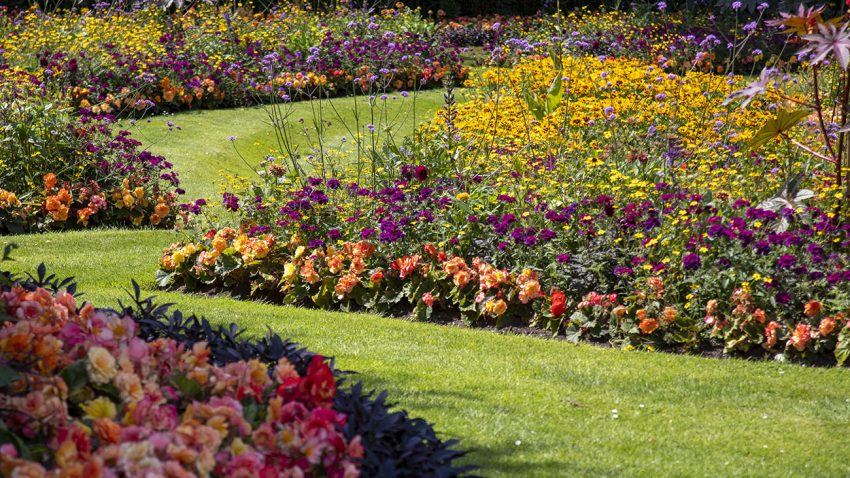 The English, much like the Australians, love a good old game of sport. They love to play sport, they love to watch sport, and most importantly, they love to talk about sport. Crowds of cotton clad Brits, dazzling in their crisp white shorts, relish the mild English summers, allowing them to sit outside in neat, tiered rows to watch a tiny, fuzzy ball batted back and forth by muscular, racket wielding athletes. In every respectable county, perfectly rectangular, sun-parched pitches, flanked by eagerly poised players clutching a leather-bound sphere become the hot topic of conversation come Monday morning.  As the crispness of autumn arrives, throngs of flag waving die-hards, faces thickly painted in the garish colours of their chosen team, turn up in droves to worship their football heroes with unbridled enthusiasm. Yet, in a country so enamoured by ball games, there is one pastime that, quite possibly, consumes the nation above all else. Gardening. For many, a backbreaking day in the garden is a fervent obsession. For others, it is merely a leisurely pursuit. And, even for those whose well-rested thumbs lack even the slightest tinge of green, the enjoyment and appreciation for The Garden seems to be inherently inborn. Gardening may well be this country’s national sport, and as an ardent spectator there is no stadium more bountiful than London’s Regent Park.

Presiding on high ground in the inner north-west of the city, between the boroughs of Westminster and Camden, Regent’s Park is one of eight Royal Parks of London. Established as part of Henry VIII’s hunting forest, Regent’s Park was developed and landscaped in the early 19th century by the city planner and architect John Nash. His vision made an indelible imprint on many of London’s top landmarks including Trafalgar Square and Buckingham Palace, earmarking Regent’s Park as an area of leisure for the royal family and their fellow aristocrats. Opened to the public in 1841, the greenspace is now one of the main parks of central London and the verdant oasis consisting of 395 acres of wide-open spaces with tree-lined pathways, lush formal gardens, children’s playgrounds, and central London’s largest outdoor sports area, is a welcome reprieve for the city’s office workers and the barrage of visiting tourists.

Over the last two years the wave of camera-clad tourists in London dissipated from a raging tsunami to a mere trickle, leaving the city’s parks either closed to visitors, or simply left to be enjoyed by local Londoners. For me, the opportunity to wander the city’s green spaces, documenting London life with camera in hand, without a slew of bodies interrupting the picture-perfect landscape was unmissable. Obtaining distinctive viewpoints of monumental landmarks and quintessential scenes was a wonderful prospect, and one that I thoroughly relished at the time. However, the unusual but magical solitude of those days cannot replace the joy of interacting with visitors and residents while enjoying a great day out and about. Even now, after almost two years living in the city, I often still feel like a tourist when venturing forth to, not only new, but also old favourite places, marvelling at my surroundings with a thrill that rivals any freshly arrived visitor.

Regent’s Park is home to Queen Mary’s Rose Garden, a tranquil and historic sanctuary swaddled by towering yew hedges that embrace the flower-laden space like a pair of outstretched viridescent arms. When a dear friend recently visited from Australia, and with the threat of the rose season soon coming to a bittersweet end, we quashed all other plans and made immediate haste to see the last of summer’s rose bounty.

As is usual with long acquainted friends not a moment of conversation was wasted with the need for silent pause or the necessity to come up for air. However, such inward reflection resulted in an awkward lack of direction, and we soon found ourselves contentedly lost within the confines of the grounds. Although the roses were our primary floral ambition it was no great disappointment to become adrift along the way as we found ourselves within a shroud of billowing wildflowers. The slender grasses of the meadow ebbed and flowed in the gentle morning breeze, and it was futile to resist their charms. As we ribboned through the freshly mown pathway their wispy tops leaned inwards to greet us, brushing our outstretched palms seductively.

With all thoughts of roses momentarily thwarted we inadvertently stumbled upon a lovingly tendered flower garden. Roses are not the only treasures to be found in the park. We stood in unison, my friend and I, open mouthed and dumbstruck in front of a flower-filled cornucopia. The colour-saturated scene was so intense I had to remove my sunglasses in order to absorb the powerful hues. The garden felt like a rare eclipse, and my eyes required sufficient time to readjust to the full force of the glaring vision. This was the Begonia Garden. With its 9,000 flowers, it is twice yearly planted with seasonal bedding, yet the summer display is a riot of colour and architectural form. Harmoniously huddled together like a raucous chorus of cancan dancers, their frothy watermelon-hued petals resembled the frivolous tulle tutus being recklessly flung about to the delight of their adoring fans. Adjacent were spectacular snaking rows of Purple Heart whose rich, deep-plum, pointed leaves were in glorious contrast to the gaiety of the begonias.

The day was luxurious in its warmth, and we relinquished our immediate search for roses, instead focusing our attention to whatever floral delights came our way. The Flower Border had no further need for advertisement as the title alone was all that was required to entice. The striking memory of the previous garden seemed to slip away within seconds as the full force of the colour spectrum rapidly assaulted the senses. We seemed to have stepped inside a rainbow.

Our weekday visit to the gardens allowed us the luxury of a peaceful viewing. Our only adversaries were a nearby picnicking family languishing beneath the welcome embrace of a lone Princess Tree, and the sounds of rapid vibration as a battalion of honeybees wrestled for space amongst the carpet of pollen.

Feeling slightly beauty fatigued we nonetheless felt determined to end our visit with roses, and a swift diversion past the Mediterranean Garden was imperative. Though not lavished with an explosion of colour like the previous displays, the drought hardy planting in this section of Queen Mary’s Garden was alive with botanical delights. The iridescent seed pods of Cupid’s Dart poked up like a periscope through swathes of golden-haired grasses whose curly fibres danced erratically in the wind and reminded me of inebriated, dishevelled youths. What was once a budding Ornamental Onion is now an architectural marvel. Its purple spikes, dagger-like and tipped with sharp bone-coloured teeth looked every bit as menacing as an ancient Medieval flailing device once hurled at fast approaching enemies. Subtler in its execution, the Mediterranean Garden, despite its occasional armament-like planting, possesses a serenity that transcends time and trends. There is nothing ostentatious in its planting, though it is still so thoughtfully curated and purposefully designed. As we turned to leave, we spied an artist setting up her paints and brushes, apron tied protectively around her waist, and I envied her joy and ability to capture such a glorious scene on canvas, and then to carry that memory home.

Perhaps it was fearing the roses may have lost their adolescent brilliance that caused us to delay our visit until the very end. Although not in their youthful prime, there they were, great masses of velvety blooms, still resplendent in their fading glory. Meticulously cared for by diligent and highly skilled gardeners, Queen Mary’s roses, primped and lovingly pampered, transcended the usual flowering season and the circular space was still awash with summer’s blooms. These were the last roses of summer, and as their velvety faces turned towards the sun, they filled the air with a fragrance which, because it was so precious, seemed twice as strong as the scents of June.

“There was something rather blousy about roses in full bloom, something shallow and raucous, like women with untidy hair.”

I hope you enjoyed visiting Regent’s Park with The Sunday Londoner. Please do leave a comment below, I’d love to hear from you! Have you ever visited this incredible greenspace in central London, or perhaps another of the city’s royal parks?

8 thoughts on “Regent’s Park – A Riot of Colour”