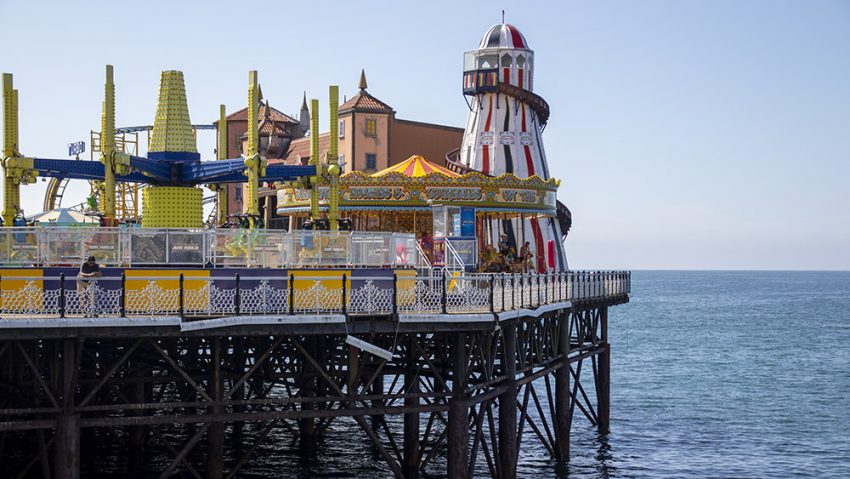 There is one invariable seaside town that sits persistently at the top of every tourists Must Visit list. A mere hour’s train journey from central London, Brighton lies perched along the southern stretch of East Sussex, and due to the construction of the London and Brighton Railway in 1842, it has flourished as a beachside resort town ever since. During the Victorian era Brighton established itself as a health retreat; a place where one could breathe in the fresh seaside air while taking a leisurely stroll along the languorous water’s edge. Londoners in need of respite from the overcrowded streets and rising pollution caused by the rapid growth of industrialisation flocked in droves to the now-famous shingle beaches for their yearly dose of vitamin D.

At the turn of the 20th century Brighton was experiencing an economic boom thanks to the throngs of sun-starved visitors that descended upon the town each year. Luxurious Art Nouveaux hotels sprang up along the golden shore like strings of sugary sweets, attracting young families as well as the wealthy London elite. Victorian ladies not wishing to blemish their porcelain complexions strolled arm in arm beneath the protection of their cotton parasols which glowed bright white under the startling midday sun. However, hurried Londoners grew weary of languid days spent huddled on pebbled beaches and soon demanded alternative forms of entertainment. In 1899, just ten years after the great Exposition Universelle was held in Paris to celebrate the latest in science and technology, the monumental Brighton Palace Pier was erected and soon became a much-loved popular theatre and entertainment venue. In the 1980’s the pier was partially damaged, and the theatre was consequentially replaced with an amusement park filled with fairground rides, including thrill rides, children’s rides, and roller coasters.

During the last week of summer, and with autumn’s crisp breath gently blowing in from the north, we decided it was time to move coastal Brighton to the top of our own Must Visit list. With the vigour of summer’s warmth, we set off for the faster, yet perhaps less romantic, modern-day train journey from London to Brighton’s historical train station, passing the towns of Horley, Crawley, and a particularly picturesque section of Outstanding Natural Beauty. Contemporary Brighton is far from a simple beachside town. Today it is a diverse and richly layered mini metropolis that is visited as much for its lively café culture and vibrant street art as it is for its old-world charm and sunny beachside location. As someone who grew up along the breathtaking coastal stretch of eastern Australia, I am here for the pure enjoyment of people watching, rather than the promise of pristine white beaches.

From the moment we alight from the train I can smell the salty air laden with iodine and tinged with something equally familiar and yet far more enticing; the perfume of freshly ground coffee beans hangs in the air like the siren song and lures us towards the source of the scent. Hulking white gulls soar overhead with the anticipation of a free lunch dropped carelessly by some distracted tourist too busy gawking at the brightly coloured buildings saturated on every side with vivid graffiti to notice the trail of hot chips left in their wake. Crooning squawks from the persistent birds form the soundtrack of the day and their screeching cacophony accompanies us on our search for Brighton’s best coffee. Not an easy accolade in a town that boasts some of the country’s finest brews.

A quick stop to rehydrate and recompose is always our first point of call and that all important coffee can set the tone for the subsequent unfolding of the day. I find it worthy not to underestimate the integral role played by a good cup of coffee – make a mistake and your spirit begins to diminish. Yet, with a little bit of research during the train ride down, you can usually determine at least one or two decent coffee venues. The day then commences with a caffeinated spring in your otherwise weary step. Brighton is renowned for its eateries and coffee scene and is known by many coffee-loving Australians as the Melbourne-by-the-Sea for its quirky establishments and high regard for the humble coffee bean. Choosing just one place is a test, and for someone like me who is eye-rollingly infuriating when it comes to decision making, we feel it best to pick the first place we happen upon from our ridiculously long, and ever-growing list.

We stumble upon Coffee at 33 where we meet Gareth and his beautiful Labrador puppy Daisy with her golden coat of silky fur and tail-wagging disposition to match. Over flat whites and buttery almond croissants Gareth shares with us a little about local life and how he loves the laid-back atmosphere and unpretentious nature of the town he calls home. Brighton and its colourful streets are awash with equally vibrant characters, and Gareth assures us that a wander through the famous Lanes, Brighton’s lively rabbit warren of narrow alleyways, is one of the best ways to explore the town and to absorb the theatrical ambiance and quirky details.

The coolness of the morning was a distant memory – perhaps the crisp breeze of earlier caught the fast train back to London – and the warmth of the day filled the air with the promise of pleasantness and blue skies. We wandered aimlessly, pausing occasionally to scrutinise some tiny detail as though admiring great works of art in a national gallery. The now familiar bird song overhead echoed down into the narrow streets and seemed a constant reminder that the incongruous beach was only a stone’s throw from these twisting laneways that felt more akin to London’s east side than an historic seaside town.

With lunch looming we heed the advice of our fellow winged companions and detangle ourselves from the maze of alleyways and head off in what we hope is the direction of the beach. The town’s seaside aspect is a wonderful mishmash of bygone era details sprinkled with slightly dishevelled modern tourists adorned in garish mismatched outfits, all peppered with a little dose of eccentric local life. For many, Brighton is a destination for beach revelry. For me, it is the perfect place to watch the world go by, one gloriously colourful step at a time.

The Brighton Palace Pier may seem like a floating tourist trap – which it most certainly is in many ways – yet the sheer visual feast made possible by utter determination and great feats of human engineering, is undeniably mesmerising. Viewed from the side the amusement park that now graces the tip of the pier is wholly alien in its appearance and feels like a Venetian Disneyland with its petrified wooden stilts that drive through the water’s surface and dive deep down into the ocean floor. On deck, bright whirling lights flash and dazzle, enticing visitors and their sticky faced toddlers and angsty teens to part with their hard-earned pounds in exchange for the promise of cheap thrills and highly inevitable spills. Whilst we shy away from the rides, we find more enjoyment in the age-old spectator sport and sit enthralled for a time watching the faces of once stern and responsible adults transform into giddy giggling big kids with faces bathed in glee.

Nothing whets the appetite quite like a breath of sea air and we allow the gentle breeze to carry us towards lunch. Fortuitously we choose a restaurant adjacent to Quadrophenia Alley, that infamous rake-thin alleyway so narrow even a supermodel must suck in when wandering through. This place was made famous by the Who’s concept album of the same name and the 1979 cult classic movie about an angst-ridden London youth, Jimmy Cooper, who escapes the drudgery of his postal job to become a member of the Mods, a sharply dressed gang constantly at odds with their rivals, the Rockers. The movie is set in and around Brighton and was based loosely on the Who’s rock opera written six years earlier in 1973. The alleyway is emblazoned with fan graffiti as well as tributes to the band, and the shop which resides next door is brimming with Mod attire and Ben Sherman polo shirts in homage to the brand established here in 1963.

However, as interesting as the memorabilia is and as delicious as our lunch is, it is the gang of Mods that appear roaring through the street during our meal that is the real feast. In stylish succession around twenty members flank the shopfront as they climb from original 1960’s Vesper scooters so painstakingly and lovingly customised to resemble the original bikes from the movie. Completely unnecessary, yet wonderfully theatrical gleaming chrome side mirrors jut out in all directions projecting a strange and otherworldly image. The Mods, all older gents with grey sideburns and quaffed back hair, dismount their machines like aliens disembarking from miniature glowing spaceships and stand poised along the footpath looking dapper in their buttoned-up shirts and cuffed up jeans.

On the recommendation of Gareth, we head towards our final destination, and part 2 of this post – a lavish concoction so bold and outlandish that its bizarrely flamboyant furnishings and whimsical decorations seem oddly at one with Brighton’s endearing sense of frivolity and fun.

I hope you enjoyed visiting Brighton with The Sunday Londoner. Please do leave a comment below, I’d love to hear from you! Have you ever visited this vibrant seaside town? Or maybe you’ve enjoyed another of England’s coastal hamlets?