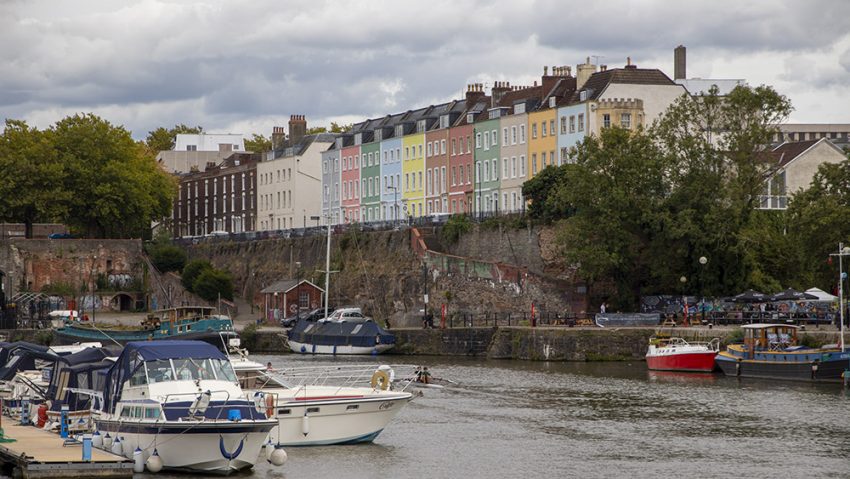 Straddling the river Avon, in the southwest of England, lies a city that is often left unfairly languishing in the shadows of London. Bristol, an almost straight shot towards the west coast from England’s bustling capital, has a richly layered and infamous history that rivals that of any great city. During the reign of ancient Rome, London, or Londinium as it was known, became the Roman capital of Britain, and eventually the Romans extended their reach westward towards Bristol, building military settlements along the banks of the river Avon.

The town’s strategic location at the mouth of the Bristol Channel became a starting point for early voyages of exploration to the New World. John Cabot (Giovanni Caboto), a Venetian navigator and explorer, set sail from Bristol in 1497 to become the first European to land on mainland North America. Soon after, in 1499, a Bristol merchant by the name of William Weston lead the first exploration to North America by an Englishman, cementing Bristol as a major influential port city.

Today the city is a lively university town, and the students have brought a youthful spirit to this historical maritime metropolis. Once a bustling dock where sailors and merchants would trade goods and set sail for faraway lands, Bristol’s harbourside is now buzzing with Sunday markets, waterside restaurants and bars, as well as a host of leisure activities including yachting, paddle boarding, cycling and rowing.

We have travelled to Bristol for a long weekend to celebrate my impending birthday and to visit my husband’s relatives who live on the outskirts of town. Dan was born just outside of Bristol and grew up in a small harbourside town known as Portishead, a name more familiar with the 90’s UK band that hailed from there than the sleepy hamlet itself. This is my first visit to Bristol, and for Dan it is the first time he has ventured back to his hometown since his family moved to Australia when he was just a child. Little has changed in the cosy cul-de-sac where Dan spent his days as a carefree youth riding his skateboard up and down the street and, as he proudly tells me as we wind our way through the sleepy neighbourhood, ‘doing stunts’ from the now demolished tree house that his dad built in their backyard all those years ago.

Back in the centre of Bristol, the elegant Georgian townhouses that pepper the affluent hilltop neighbourhood of Clifton and the plethora of caffeine fuelled eateries that line the leafy streets seems the perfect place to begin our leisurely exploration.

At the recommendation of a local we head straight to Clifton Village, a pretty collection of cafes sandwiched between some of the area’s grandest Georgian architecture and the lively shopping precinct that spreads out towards the famous Clifton Suspension Bridge. With caffeine in mind, we opt for the Primrose café, a bright, cosy cafe-bistro with a quaint cobbled patio serving meals made with traditionally harvested produce. Perfectly located, the Primrose Café sits at the entryway to the Clifton Arcade and is such a lovely spot to while away a Sunday morning watching the locals and their four-legged friends enjoy a leisurely brunch.

After ordering Eggs Benedict and two strong flat whites, we settle at our outdoor table to enjoy the ambiance and un-hurried hum of a sunny Sunday morning. I become mesmerised by a would-be artist who seems to have plonked himself down in front of the adjacent greengrocer on his collapsible stool to study and draw the surrounding architecture. Amongst the Sunday brunch crowd and swiftly passing trade he seems utterly oblivious to his awkward position pressed up against the vegetable stalls. I feel glued to the unfolding comedy of errors as shoppers try tactfully to squeeze past him in their humble quest for fresh fruit. Utterly absorbed in his task he scarcely notices when the greengrocer appears to gently usher him out of the way.

We stroll through the impressive Victorian building to admire the collection of independent shops. The temptation to spend is fortunately thwarted by the arcade’s relaxed opening hours and we find a handful of the shops are closed on Sundays. Without the allure of retail’s call, we are left to admire the architectural details within, and I leave feeling smugly satisfied by my enforced restraint. Stepping back out onto Boyce’s Avenue we find a street humming with activity as locals shop for seasonal produce at one of the three abundant fruit and veg stores or gather to meet friends for coffee in one of the cafes along the pedestrianised street.

A short stroll from Clifton Village is Clifton Downs, a picturesque stretch of parkland that leads to the Clifton Observatory. Built in 1766, the observation tower has breathtaking views over the Clifton Suspension Bridge, an incredible feat of human engineering spanning the Avon Gorge and the River Avon, linking Clifton in Bristol to Leigh Woods in North Somerset. The bridge is an incredible sight, made more beautiful by the surrounding Bristol countryside. We stop for a few moments to bask in the magnificent view. Beneath our vantage point we spot the participants of the Great Bristol Run, the city’s yearly marathon. Hundreds of runners, resplendent in their neon spandex accoutrements, ribbon along the distant riverbank below like tiny ants marching in perfect unison.

The city is swarming with revellers as throngs of energetic spectators turn out in droves to watch as hundreds of proud participants cross the finish line in various states of elated exhaustion. Emotion blankets the crowd as the runners, now clad in an amusing mixture of sportswear and celebratory regalia, entwine themselves amongst their supporters in a tangled mass of hugs and cheers. Merrily ensconced, we follow the masses towards what was once the working docklands in search of sustenance. Watching others exert themselves has roused the appetite once more.

Bristol Harbour was the original Port of Bristol, but as ships and their cargo increased in size, it has now transformed into a modern redevelopment of restaurants and cultural venues such as the Arnolfini art gallery, Watershed media and arts centre, M Shed Museum, Antlers Gallery, and the We the Curious science exhibition centre, as well as a number of fashionable apartment buildings. The S.S. Great Britain, the world’s largest passenger ship between 1845-1854, was built in the then working port as a transatlantic service carrying passengers from Bristol, across the Atlantic Ocean to New York. The ship, the largest vessel afloat in her time, now permanently resides in the harbour, where she was originally constructed, to live out her retirement as a tourist attraction and permanent reminder of Bristol’s seafaring past.

Wapping Wharf is nestled on the site of the old shipyards and is now a bustling collection of street-style eateries all housed comfortably inside industrial shipping containers. The array of global delicacies on offer are an enticing challenge for two hungry travellers. With Sunday lunch goers in no hurry to relinquish their prime positions we eventually opt for a quiet table tucked in the corner of Bandook, a vibrant modern Indian eatery offering moreish street food classics to share – an Indian version of a Spanish Tapas bar.

With heads and hearts full of new memories we bid farewell to Dan’s little corner of England, with a quick deviation to the Bristol Cheese Co, and the complimentary Bakers & Co nearby. With two of my favourite foods within reach I curb my enthusiasm slightly and walk away with small but lovely loaf of seeded sourdough and a deliciously stinky wedge of Bath Blue.

I hope you enjoyed visiting the lively port city of Bristol with The Sunday Londoner. Please do leave a comment below, I’d love to hear from you! Have you ever visited this part of England before?