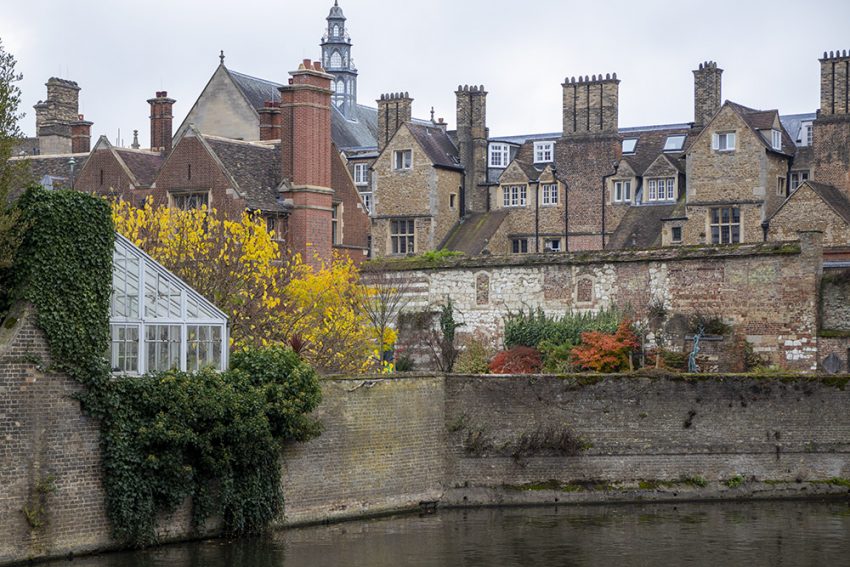 As the winter evenings close in and the temperature plummets to chilly single digits, my thoughts turn from sun-filled garden walks in the scenic grounds of historical manor houses to cosy fireside pub meals in quaint little villages, their alleyways festooned with early Christmas decorations and twinkling festive lights. Swaddled in our finest woollens and wrapped safely in the warm embrace of our winter coats, Dan and I hop on the train for the northbound journey to the picturesque university town of Cambridge, a leisurely hour’s ride away.

The landscape surrounding the town and its charming university seem the perfect city escape, and it is perhaps our last chance to see the full flourish of autumnal colour before the final copper-tinged leaf falls. However, the town (and its equally famous institution) holds a fascinating history that rivals its alluring beauty, and perhaps even that of its infamous university adversary to the southwest.

Having previously visited Oxford, it is near impossible not to compare these two great university towns. Like The Beatles and The Stones, the two are inextricably linked; you cannot possibly think of one without recalling the other. However, as far as rivalries go, Oxford vs Cambridge is perhaps more symbiotic than many of us may have realised.

Cambridge was founded, eight hundred years ago, by Oxford scholars fleeing persecution during a period of conflict between the church and the state. In 1209, the power struggle between King John and Pope Innocent III over who should appoint the next Archbishop of Canterbury was the burning issue of the day. The church, who still retained much power in England during the early 13th century, reacted by organising crusades against the infidels abroad, as well as arresting unsavoury heretics on home soil. The British historian, Professor Robert Moore, in his book The Formation of a Persecuting Society, tells the story of how successive popes in the twelfth and thirteenth centuries incited mobs against lepers, gays, Jews, and other perceived undesirables, consequently forming a culture of persecution against outgroups and minorities that has blighted Europe ever since.

That same year, the townspeople of Oxford, backed by the authority of the King, hanged two university clerks – for a murder of which they were apparently innocent – causing the scholars of Oxford to flee and settle in the newly chartered town of Cambridge, where a new and prosperous university was to be founded soon after.

This brief yet fascinating history lesson was recited to us during a 40-minute punt ride – those long, flat-bottomed boats propelled by athletic students wielding long narrow poles – by a well-rehearsed young punter on a gap year between his school graduation and his impending university studies. With his learned snippets of gathered information we became privy to the knowledge that current Cambridge students can neither take jobs, nor are they permitted to drive cars. The former, presumably so as not to interfere with their study, the latter as a necessary precaution to save the town’s streets from becoming car-logged and overcrowded. Thanks to the traffic restrictions and the palm-flat terrain, Cambridge has become the unofficial Bicycle Capitol of England.

Our young guide regales us with condensed stories of university history, while, despite my best efforts to remain politely alert, my attention wanes as the storybook-scenery unfolds before us. Through the foliage of weeping willow trees, their supple branches dipping into the languid waters of the river Cam like fair maidens washing their golden hair, I catch glimpses of the impressive Romanesque and Gothic architecture beyond. The elongated spires recall the sandcastles of my childhood, when wet sand dripped from my tiny fingers, creating my own naïve ephemeral art.

Subsiding from the architectural nostalgia my eyes adjust to the magnificence of my surroundings, and I begin to focus on the smaller, seemingly less significant details. Gliding towards the renowned Bridge of Sighs, named after its predecessor in the city of Venice, our attention is directed towards this equally impressive structure, whose only similarities to its Venetian counterpart are a covered roof, and gracefully arched base.

Despite its alluring beauty, my admiration lies elsewhere as we pass by an unassuming, yet perfectly placed Victorian glass-clad greenhouse whose waterside location elevates it from a mere garden shed – albeit a very beautiful one – to a building of elegance and charm. With unwavering conviction, I ask our young guide if he knows anything about the beguiling building. Unaware of my fascination with the glasshouse, he assumes I have enquired about the monumental Trinity College building beyond and proceeds to captivate me with its myriad of worthy qualities. When I insist that my interest has not settled on the imposing behemoth behind but has instead come to rest on the humble glass structure below, he seems perplexed. When I attest, much to his confusion, of my desire to live in such a beautiful place, he looks puzzled and simply says ‘that’s just the place where they store ladders and other such trivial gardening things’.

Undeterred, I snap a photo for prosperity’s sake and store away the image on my camera’s memory drive, to look upon again when my own remembrances will inevitably fade.

The early morning fog hangs heavy in the air like a woollen blanket, shrouding the landscape in an eerie atmosphere that evokes mysteries from the dog-eared pages of a Sherlock Holmes novel. Our young guide profusely apologises for the less than vivid views, as though he has the power or the means to control the English weather. I wonder if perhaps the unfolding scene is rendered even more beautiful by the enveloping fog; fleeting glimpses of pale gothic spires, whose pointed fingers rise sharply from the mist, seem mysterious and tantalising, like a poised seductress revealing alluring glimpses of alabaster flesh hidden underneath a dainty gloved hand.

No shadows cross this dampened land

No blue fills the hidden sky.

A dog’s bark in the muted distance sounds

As you and I go, silently, passing by.

No distance past our chilled breath’s span

We walk with softened footfall there,

And speak in hushed and secret tone,

Our world apart where we may wander

And so pause upon this unseen plot

Where wetted leaves in gentle measure

In this veiled world, you and I.

Flame-red autumn vines spread upwards over pale stone facades like a raging inferno, their tendrils clinging to the stone, reminiscent of a thousand tiny embers glowing hot amidst the icy mist. I feel momentarily disabled by the awe-inspiring beauty bestowed upon us by nature’s deft hand, and despite our meandering pace, feel rather hurried and underqualified to adequately capture the Dantean scene with the skill it truly deserves.

The river Cam is delightfully calm today, the congestion of day-trippers and Sunday sightseers of yesterday has eased, and our only travel companions during our river run remain the local birdlife and the ominous encroaching fog. Content to sit back and luxuriate in our picturesque surrounds, we languish silently, mesmerised by the rhythmic sound of the long, narrow guiding pole as it propels us steadfastly along, sluicing gently through the water like a hot knife through a slab of icy cold butter.

Alighting from our floating vessel we bid our young guide good day and venture forth in search of sustenance. Watching someone else work can rouse a surprisingly ravenous appetite. Although spurred on by thoughts of lunch, we wander aimlessly, content on circling the majestic grounds of St John’s College, whose fanciful, gilded iron gates allow snatched glimpses into the time-frozen world within. A quick Google search reveals an impressive list of alumni, including the winners of twelve Nobel Prizes, seven prime ministers and twelve archbishops of various countries, and at least two princes and three saints. Also, the Romantic poet William Wordsworth, as well as William Wilberforce and Thomas Clarkson, two abolitionists who led the movement that brought slavery to an end in the British Empire. Not a bad rollcall for just one of Cambridge’s thirty-one colleges.

Pausing fortuitously close to an unassuming side gate to replace my overworked camera battery, we are delighted when in true British fashion the family of a graduating student are leaving the college grounds and delay their exit momentarily to allow us to enter before they pass through. Well, don’t mind if we do. Like two 80’s teenagers let loose backstage at a rock concert we muster up some flimsy story in the advent that we encounter any authority, and our little adventure comes undone. Escalating our courage to that of heroic Musketeers we hurry onwards towards the shadowed embrace of the towering walls.

Reserved for the accomplished footsteps of faculty, scholars, and visiting alumni, the Bridge of Sighs lays up ahead, her gracefully arched arms beckoning us forward towards her welcoming embrace. Just a little peek. The undulating stone walkway, worn uneven by centuries of hurried steps, feels cold and damp underfoot, despite the protection granted by my woollen socks and thick-soled boots. As we stand there, upon her ancient, time-worn deck, watching with unabashed nostalgia as silent punters glide by below, it is easy to imagine scholarly life here all those centuries ago- surely not that much has changed amongst these well-traversed and hallowed halls.

We settle in for a cosy lunch inside the town’s oldest pub, The Pickerel Inn, founded in 1608 and believed to be frequented in its heyday by some of England’s literary greats such as J.R.R. Tolkien and C.S. Lewis. In the history filled corners, candles flicker against dark wooden beams as waitstaff serve warming plates of traditional British pub fare with unfussed aplomb. It is easy to imagine the likes of Tolkien and Lewis, huddled together in a darkened corner with ales in hand, discussing the value of narrative and their enthusiasm for the fantastical, waiting patiently for the fog to dispel, just as we are today.

I hope you enjoyed visiting Cambridge with The Sunday Londoner. Please do leave a comment below, I’d love to hear from you! Have you ever visited this incredible place, or perhaps another of England’s picturesque university towns?

8 thoughts on “Cambridge – Shrouded in History”