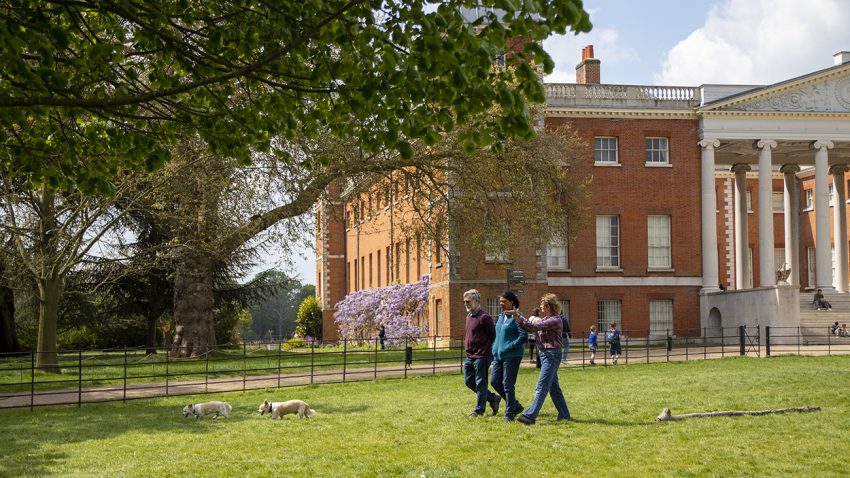 With spring well under way here in England the variety of wonderful things to see and do seems almost infinite. Grand old homes with their well tendered, enveloping gardens fling open their gates to allow curious visitors the chance to witness these properties at their most glorious. Many of the country’s historic manor houses sit suspended in time, unadulterated by modernity; perhaps with only the most sympathetic touches applied to their ancient facades and elegant interiors. However, the structures themselves are made only more beautiful by their naturalistic settings, and together they combine to create a vivid portrait of a previous era.

Throughout the colder months much of my spare time is spent dreaming of wandering through flower filled gardens with the sun on my face and the warm spring air suffused with the spicy fragrance of wisteria. Sitting by the warmth of the radiator my list of places to visit when the weather allows grows long. I have to remind myself that without the rain there would be no wildflowers to brighten the sodden earth with rich swathes of spring colour. Living in England means learning to appreciate the seasons for not only what they offer in their immediacy, but for the important groundwork they lay for the approaching season. Though I may not relish the shortness of winter’s darkened days, I have come to appreciate the virtues of its romantic charm.

As soon as the first spring bulbs begin to appear, the imagined calm and tranquility of garden visits becomes partially replaced by a sense of anxiety of where to visit first. Because each fleeting bloom is soon superseded by another equally enchanting specimen, suddenly choosing from that long list is like asking one to select just a single delicious chocolate from the entire assortment. Many of England’s historic gardens share countless botanical similarities, those quintessential touches that lend the English gardens their romantic and unabashedly nostalgic appeal. However, each garden is a manifestation of the very hands that created it. The whims and passions of the gardener is implanted firmly into the landscape. Some are bursting at the seams with a glorious, tangled mass of colour, while others are a picture of restrained elegance with only a single shade or bloom at their heart. Therefore, a little bit of strategic planning is necessary to enjoy each garden at its very best.

The city of London alone has its fare share of some of the country’s greatest and most magnificent historical manor houses nestled in what was once an uncompromised countryside setting. Today, the vast majority of these stately homes sit enveloped by urban sprawl and their once immense surrounds have now been re-established as local public parks. The diminished scale of these cultivated spaces has in no way interrupted the loveliness of the setting. That perfect blend of wild formality which has made the British garden so beloved around the world is still perfectly preserved, and what remains is unimpaired and intensely beautiful.

On the west side of the city, only a few train stops from our home, is a place unlike any other in London. Osterley House and Garden was originally a large farmhouse, with its existence first noted in the 13th Century. Later, in 1562 the manor house was acquired by Sir Thomas Gresham, a commercial agent and financial adviser to Elizabeth I, who replaced the existing structure with a more refined and statelier manor house. The house was then reimagined in the 1500’s by the grandson of a wealthy banker Sir Francis Child into a lavish mansion. Sir Francis’ grandson, also called Francis, engaged architect and interior designer Robert Adam to reinterpret the building into the monumental neoclassical structure we see today. Osterley is one of the most well-preserved examples of the architect’s work and his passion for symmetrical unity and harmonious interiors can be seen throughout the entire house. Robert Adam was one of the foremost leaders of the revival of classical architecture in England and Scotland, with his lush interiors directly influenced by the frescoes he saw at Pompeii and Herculaneum during his Grand Tour of Europe, as well as the Palladian architectural symmetry adapted to the building’s exterior.

Although distinctly Elizabethan in style, the sumptuous interiors are laden with European influences throughout. The consequent obsession and admiration with the details of Europe’s ancient history resulted in a seamless mixing of cultural influences that made Adam’s designs a homage to the classical past. Not only a revered neoclassical architect, Adam was also an accomplished interior and furniture designer which allowed him to create a uniquely encompassing home where furniture, interiors and structure all played equally integral roles forming a harmonious space where each room flowed seamlessly into the next. Bespoke furniture was created, and hand painted for the specific needs of each room, with no detail overlooked. The chairs in The Eating Room were upholstered not in the customary plush fabrics made for comfort, but from sturdy leather so that the aromas caused by food would not penetrate the fabric and cause the smell to linger long after the meal had finished. The large dining table was always painstakingly removed after eating, and the chairs pushed to the perimeter, opening up the space and creating a fluidity between the rooms without the encumbrance of furniture or inanimate objects.

So intense was the architect’s desire for symmetry, the use of mirroring was often employed at great expense to the owner. In most rooms the intricacies of the ornately carved stucco ceilings are mimicked below in the plush carpets or the complex design of the original wooden floors. In The Eating Room – so named because Francis Child wrote that label instead of using ‘dining room’ on the architectural blueprints – a non-functioning door has been added to one wall to ensure the room retains its balance and symmetry. It is these distinguishing details that set Osterley House apart from other historical homes in London, and which bring a touch of the eccentric to the atmosphere. Without the consideration of money constraints Robert Adam was able to realise even his most ambitious and theatrical ideas. At the time of acquisition by the Child family the front of the mansion was home to a large library. This was removed by Adam and the front was then expanded to create a huge portico with vertiginous Doric style columns rising to a steeped ceiling imitating a Greek temple. On a sunny day the golden light fills the space, transcending the already monumental structure into an awe-inspiring sight.

The 18th Century garden at the rear of the property is a spectacular extension of the home. Adam continued his design influences with a neoclassical semicircular garden house and Doric Temple placed within the well-manicured grounds. This generous landscape, on a magnificent scale compared to the surrounding residential gardens, is a fantasy of colour and delight. Circling around the edge of the building you will see the mass of purple wisteria which wallpapers the entire length of the exterior. The heady, sharp scent of flowers leads to the larger terrain beyond where glimpses of the countryside are revealed, and the echoing perfume of the wild bluebells fills the air. Prodigious trees populate the meadows, and a mighty oak stands sentinel among the wildflowers as it has done for many centuries before; a reminder that although the ingenuity of humankind created the adjacent architecture, it is nature that presides here.

In 2007 restoration work began on the park and gardens beginning with the recreation of Mrs Child’s flower garden. In the herbaceous borders dashes of intense colour and form arise from the sea of flowers, creating a rhythm of varying heights and directing the eye towards the Grade II listed garden house. Black velvety tulips flirt unabashedly with their neighbouring blooms, and drifts of tiny daisies have sown themselves everywhere like a welcome weed guiding us from one billowing flower bed to the next. Mrs Child no doubt adored her little piece of flowery paradise and must have wandered aimlessly, happily weaving her way amongst the flower beds. I follow in her imagined footsteps enjoying the serenity, a quiet contrast to the extravagant interiors. An adjacent walled garden beckons me over, enticing me with the promise of the floral delights that lie within. A perfectly placed wooden bench with an air of antiquity sits nestled below a billowy blossom tree whose frothy white flowers have carpeted the ground below, so dense as though deliberately laid.

Guarded by an old magnolia tree the entrance to the walled garden is protected by an ornate iron gate whose arms are flung open to welcome the visitor inside. Filled with neat, elegant rows of annuals and edible plants the cool hues of the foliage contrasts against the warmth of the enveloping red brick wall. Frilly tulips, teeny iridescent forget-me-nots, and big, bold daisies spill out from apricot-hued terracotta pots giving the impression that very little has changed in the aesthetics of the garden since its first inception. Soft mounds of flowers brighten the rich, brown earth and differ greatly in their size, colour, and scent. Long, formal clipped hedges add formality and divide the garden into a well-planned series of botanical spaces which then lead to an open, more naturalistic setting where bluebells grow in the shade of the woodland trees. The small, nodding, bell-shaped flowers release an intoxicating wave of sweet perfume which follows us on our walk.