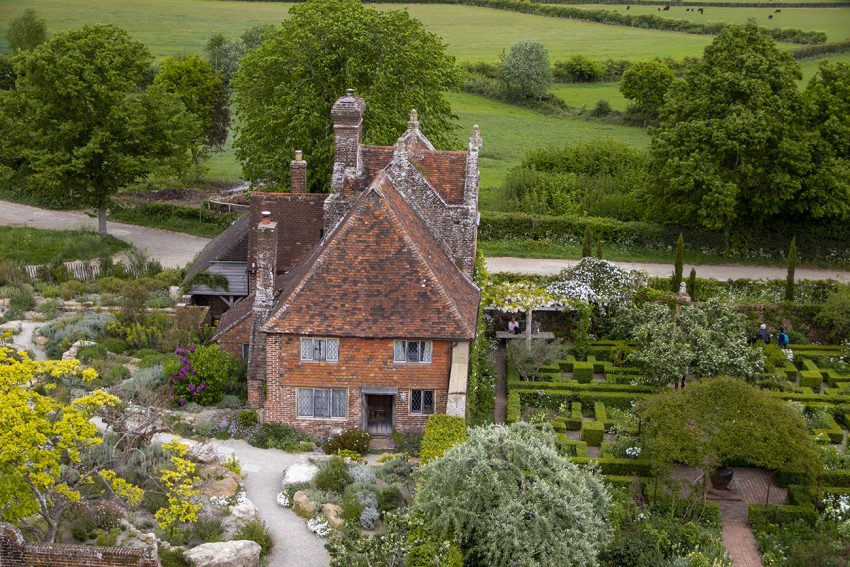 “The heavy golden sunshine enriched the old brick with a kind of patina, and made the tower cast a long shadow across the grass, like the finger of a gigantic sundial veering slowly with the sun. Everything was hushed and drowsy and silent but for the coo of the white pigeons.”

There are a few places, and even those which we may never have the pleasure or fortune to visit, that for some inherent reason pull at the heartstrings, causing us to feel an immense, yet sometimes unexplainable connection to them. Sissinghurst, nestled amongst the idyllic rolling landscape of Kent in the southeast of England, is one of those places. The estate, a sprawling 460 acres of picturesque Wealden countryside, is a bucolic masterpiece where Mother Nature has generously wielded her artistic hand to create an expanse of lush fields dotted with woodland trees, vast wildflower meadows, and a series of undulating hillsides that stretch away languidly into the Kentish landscape beyond.

Since its original inception Sissinghurst Castle and Garden has steadily evolved into the elegant manor house that I witnessed during my magical visit in May, when the surrounding gardens and woodland estate were flourishing at the height of an English spring. The property, originally used as a Saxon pig farm in the Middle Ages, has undergone a series of interesting transformations spanning the centuries resulting in a long and complicated history. From 1756-63, the buildings were used as a prison for up to 3,000 French sailors who were captured by the British during the Seven Years War. Held for months at a time in vile, stinking conditions, the prisoners lived in ‘cells’ with little access to fresh air, clean water, or adequate food supplies. Although Sissinghurst is resplendent in its grandeur, with its fairytale Elizabethan tower and its regal appearance, the property is not actually a castle as its name suggests. The sailors referred to Sissinghurst as ‘le chateaux’ hence ‘castle’ being adopted into its name, although not a direct translation. In the early 19th Century, the estate was used as a poor house for the able bodied. Around 100 men worked the farm in exchange for housing and food, while the owners, the Mann-Cornwallis family, repaired many of the buildings. Their legacy is apparent even today- on the weathervanes you can see the markings MC 1839.

However, as enchanting as the surrounding countryside is, and as fascinating as the history may be, it is the 20th century garden, created by a dedicated husband and wife, that draws me here. In 1930 Sissinghurst was purchased by Vita Sackville-West, a prolific fiction writer, award-winning poet, and gardener, and her Diplomat husband Harold Nicolson. They then began the transformation of the property from a collection of dilapidated buildings and neglected gardens, into an enchanted wonderland full of colour and inspiration for its newly devoted owners.

Perhaps with Sissinghurst it was the romantic tale of a well-travelled and artistic couple that first drew me to this special place. Moving to England nearly two years ago ignited my love for gardens in a profound way. The quintessential English gardens, with their profusion of colour and whimsical delight, were the stuff of my childhood dreams. Despite growing up surrounded by the beauty of white sandy beaches lined with clusters of twisted coastal banksia trees, I still dreamt of the typical English country cottage garden bursting with a riot of flowers and herbs. Here in Sissinghurst my dreams became reality. I imagined Vita’s romanticised existence, her mornings spent weeding the herbaceous boarders in her cottage garden, broken by long lunches underneath the shade of a fruit tree in the company of Harold and their two children, followed by an afternoon of focused writing enveloped in the safety of her writing room in her beloved Elizabethan Tower. Such fantasies, based on accounts I had recently read in Sissinghurst: Vita Sackville-West and the Creation of a Garden, by Sarah Raven, triggered my personal dream as an artist living out my days in my own studio. My imagination was in overdrive as I envisaged myself surrounded by a billowing cottage garden filled with honeybees and dragonflies. It was, for me, the idealistic artist’s life.

England in May is glorious, and although the weather can, quite often, be left playing catch up, the plant life, despite an often-brooding temperature, will never fail to delight. Gardens can be beautiful year-round, yet the grandest gardens, those well-manicured and carefully tended spaces that draw throngs of amateur gardeners and nature lovers alike, are ideally to be visited at their very best. Yet, in a country such as England, where each new season, and every aspect within that season, presents its own little succession of fleeting botanical treasures, it can be difficult to choose that perfect time to visit. With the early budding of roses this year, and with the tulips and irises at their peak, May seemed the perfect time to rent a car and make the 2-hour journey from London to Kent to see Vita and Harold’s creation.

Sissinghurst can easily be described as ‘gardens within a garden’ for its succession of ‘garden rooms’ which lead the visitor through from one enchanting room into another, each of them becoming equally enticing. The effect is utterly overwhelming and thoroughly absorbing. From the moment I wandered into the forecourt, following Vita’s imagined footsteps beneath the red-brick manor house and out into the impressive top courtyard – which in Vita’s day would have been a ramshackle area of overgrown vines and discarded debris – I had a sense of what the writer must have felt when she saw her new home for the first time, that feeling of possibility, of creating a beautiful and tranquil haven amongst the ruins of Sissinghurst.

I fell in love; love at first sight. I saw what might be made of it. It was Sleeping Beauty’s Castle…”

May heralds the month of planting at Sissinghurst. The earth has begun to warm, and the frosts of winter and early spring have ceased to be a looming threat. Many spring bulbs have finished their flowering, gracefully making way for the early summer flowering biennials. I spy great spires of dazzling magenta foxgloves in the ‘Purple Boarder’ with their tubular finger-shaped flowers dotted with spotty marks that conjure images of a wild leopard print hat. Interspersed with soft mounds of delicate violet hesperis, bold royal purple irises, and tall clusters of proud alliums with their amethyst pom-pom shaped heads bobbing gently in the morning breeze. Soon these beds will be bursting with glorious summer dahlias, which have been carefully stored and nurtured in a greenhouse over the winter.

Vita was renowned for her love of roses and ‘The White Garden’ showcases her adoration of this summer bloom to perfection. The original white rose that Vita planted and lovingly trained over the elegant iron arbour is still the focal point of the space, and although my visit is too early for this variety to be in bloom, the sheer beauty of the foliage as it cascades over the time-worn metal structure is joyous enough, like a voluminous Victorian crinoline waiting to burst into bloom. This section of the garden was originally home to Vita’s beloved rose collection, but as they outgrew their space, they were transferred to what was to become ‘The Rose Garden’. When planning the garden, Harold found some white gladioli, white irises, white pompom dahlias and the white Japanese anemones, which he and Vita both loved.

Warm reds, burnt orange, acid yellow, and gold feature in the South Cottage Garden, which is even more ablaze with colour in late summer and autumn. As I take respite on a weather-worn wooden chair beside the South Cottage I can almost smell the summer-flowering rose Madame Alfred Carriere as it fills the spring air with its fragrant perfume. This rose was the first thing that Vita and Harold planted at Sissinghurst, on the day their offer to buy was accepted. I imagined sitting in that very spot, in mid-June, as the great, billowy blooms begin to decorate the cottage wall with a joyous informality.

“It is a sad moment when the first phlox appears. It is the amber light indicating the end of the great burst of early summer and suggesting that we must now start looking forward to autumn. Not that I have any objection to autumn as a season, full of its own beauty; but I just cannot bear to see another summer go, and I recoil from what the first hint of autumn means.”

Vita’s vision for ‘a tumble of roses and honeysuckle, figs and vines’ were the source of inspiration for ‘The Rose Garden’, and it became a space for her to indulge her love of old, heritage variety roses. Although most of the garden’s legacy owes much to Vita’s innate artistic style and her love of gardening, flowers, and her expert eye for colour, the garden’s foundations can largely be accredited to Harold’s keenness for strict geometry. This is evident in the circular shaped hedge, or Rondel, at the west end of the garden. His unwavering eye for detail and scale was the perfect basis for Vita’s riotous collection of more than 200 roses, and countless other flowering plants. Many of the original roses that Vita planted over her lifetime at Sissinghurst have been lost over the decades, yet a great number still survive, including Vita and Harold’s glorious Madame Alfred Carriere, which has graced the cottage walls for more than 90 years.

The garden at Sissinghurst may be quintessentially English in style, however the couple’s passion for travel sparked a love affair with exotic plantings, and in 1935, while on a cruise around the Mediterranean, Vita and Harold visited the Greek island of Delos which inspired the creation of a new garden at Sissinghurst. Named Delos in homage, they transformed a plot of land at the edge of the garden into a Mediterranean oasis of ruined stone fragments and sun-loving plants. Unfortunately, the spot Vita and Harold chose for their new experimental garden was unsuitable for Mediterranean plants and the north-facing aspect lacked the required sunlight for the arid plants to happily flourish. Fortunately, with the help of renowned landscape designer Dan Pearson, the National Trust has reimagined Vita and Harold’s Delos into the Mediterranean Garden they had dreamt of, a place of austere yet delicate beauty, full of loss and ruination as well as promise and renewal.

The gardens at Sissinghurst were created by Vita and Harold with a sophisticated charm and gentle intimacy, a place to take respite from the outside world, creating an environment of tranquillity that both inspired and nurtured. Vita and Harold always intended ‘The Orchard’, at the edge of the space, to be half garden, half wilderness, and filled it with wildflowers and self-seeding grasses. Roses were planted against the boughs of old apple trees, with winding paths mown in long grasses, creating a space to become lost in, while bees make use of the nearby apple blossoms, making honey in the hives.

In 1928, two years before Vita and Harold bought Sissinghurst, Vita began speaking for the National Trust, and along with her husband, became a member of the Trust’s council. Vita Sackville-West and Harold Nicolson were the last private owners of Sissinghurst Castle. After Vita’s death in 1962, Harold decided that Vita’s beloved Sissinghurst should be given over to the care of the National Trust, who in 1967 began custodianship of the property, caring for the gardens and buildings until this day.

“A flowerless room is a soulless room, to my way of thinking; but even a solitary little vase of a living flower may redeem it.”

I hope you enjoyed this very special visit to Sissinghurst with The Sunday Londoner. Please do leave a comment below, I’d love to hear from you! Have you ever had the pleasure of visiting this incredible place?

16 thoughts on “Sissinghurst – A Tumble of Roses and Honeysuckle, Figs and Vines”