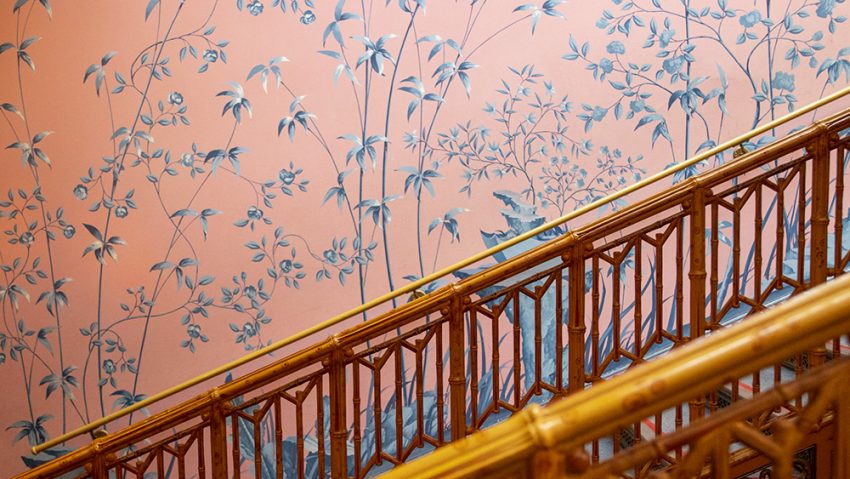 Brighton’s streets are a cornucopia brimming with vibrant buildings, lively street art, and a delightful succession of colourful local characters. Yet there is one place that towers above all else with its utter extravagance and outlandish attitude, and despite its monumental stature and exotic appearance, seems oddly at ease in its humble setting by the sea. The Royal Pavilion is an eccentric and slightly perverse palace, fit quite perfectly for its equally outlandish King. In 1783, at the tender age of 21, George, then Prince of Wales and next in line to become Prince Regent, travelled to Brighton to bathe in and drink from the healing sea water to cure his glandular swellings. This popular natural therapeutic remedy drew throngs of those in fashionable society to the seaside town. However, George’s hedonistic and extravagant nature saw any benefits from nature’s cure soon lost in a riot of entertainment and booze. A far cry from the staid conventions of his father, George III, whose court was described by Horace Walpole as ‘the Palace of Piety’.

Soon after, in 1784, George returned to Brighton and took lease on Brighton House, a lodging property on the town’s old thoroughfare known as the Steyne. A year later, George purchased the property, employing the aristocracy’s favourite architect Henry Holland to transform the humble lodging into the relatively modest neo-classical structure then known as the Marine Pavilion. However, once inaugurated as Prince Regent, George began major alterations of his residency in London, and soon refocused his time and energy on the final evolution of what was to become the Royal Pavilion. Unwavering ambitions and his need to be seen as a major player on the world stage caused George to question the architecture and contents of the existing royal palaces which he felt did not adequately reflect Britain’s noble status.

Under the employ of George, John Nash, London’s foremost architect and city planner responsible for the development of Regent’s Park and Regent Street, completely remodeled the previous work of Henry Holland’s chaste structure creating an extraordinary vision described by English writer Osbert Sitwell as ‘the most peculiar mirage that ever floated above our Northern seas’. Nash’s precision and expertise together with George’s eccentric vision conceived a huge sprawling Indian-inspired palace, chosen partly to reflect Britain’s burgeoning colonialism in India, as well as for the outlandish novelty of the decorative elements.

The facade combines an unconventional mix of Gothic friezes, Mughal scalloped arches, fretwork jali screens on the east front, and two upswept Chinese-influenced roofs on either side of the central dome. Yet it was the interior of the palace that truly interested George. As an avid collector of French decorative arts, some say George may well have been inspired to create a theatrical background comparable in some respects to Versailles. However, following the French Revolution, the Prince Regent’s Francophile tastes may have been seen as politically inappropriate, which possibly resulted in his desire to decorate his Brighton palace in the exotic oriental style.

The Pavilion is a lavish early example of the new dominance of the interior decorator, and in the combined hands of Nash, and the artist-decorators John Crace and Sons, they created interiors of unparalleled magnificence. John Crace was an expert in Chinese and Asian artefacts and provided designs based on Chinese objects, as well as commissioning wares made in China. The rich and highly sophisticated interiors were cleverly designed to encourage the visitor to visually engage with the space, yet simultaneously shock and awe those who graced the corridors with a feeling of utter dismay and perhaps impart them with a sense of unobtainability and pure jealousy. These were interiors to be admired and revered, not procured.

Gareth, our new friend met over the morning’s cup of perfectly brewed coffee, assured us that as striking as the exterior of the building is, to fully appreciate the monumentality of the structure you must explore the interiors. We left our exploration until the afternoon when the lure of lunch would not distract. The interiors play host to a startling palette of colours including peach blossom, rich crimson red, and chinoiserie blue set against opulent gilding, avant-garde paint effects, superb furnishings, elaborate window drapery, fitted bespoke carpets, and vast ostentatious chandeliers. One can only imagine the visitor of that era, resplendent in the day’s most prized and highly coveted fashions, would become enthralled and mesmerised by the visionary delights. With each velvet shoed step, the richness of decoration increased and overwhelmed.

Still enraptured by the building’s façade, we pay the rather pricey entry fee and step inside the Entrance Hall. With its subdued appearance in pastel spearmint green and echoes of oriental motifs, the hall acts as a prelude for the fantasy to come. Soon the quietude of the entryway is relegated to a mere memory as The Long Gallery comes into brilliant view. Wonderfully shocking in its visual appeal, the elongated walls are bathed in peach blossom and are liberally adorned with a hand painted forest of vertiginous bamboo spires perched here and there by rare and exotic birds, their slender feathers of powdery blue. Although the space is awash with detail it soon becomes apparent that the real treasures hover slightly out of reach. The Gallery’s ceiling is dramatically lit by an imposing central painted glass laylight supported by cast iron trusses, a technique Nash used in a previous project. Although technically an access corridor, the space was furnished as a sitting room, lending an atmosphere of unhurried elegance whilst allowing the fashionable aristocratic guests the chance to promenade their exclusive and lavish outfits without haste.

We wandered, stupefied, from the welcome embrace of the peach blossom entryway up the cast iron staircase and arrived with mouths agape into the elaborately decorated Banqueting Room. If the Long Gallery was the decorative equivalent of an esophagus tube leading diners to their degustation, then the Banqueting Room is the exquisitely adorned swollen belly of the beast. A Magnificent crystal and cut-glass chandelier resides above the dining table. Its lustre lit by a myriad of oil lamps was said to produce ‘an artificial day’ and its brilliance would have penetrated every corner of the room, giving diners a truly regal and unparalleled dining experience. Poised in perfect symmetry in the centre of the room, this huge iridescent creation, reminiscent of those giant glowing Humboldt squids found in the deepest, darkest seas, seems to defy gravity as it floats weightlessly above those who dine below. At 30 feet high, and weighing more than a tone, I’m thankful for the six chain linked dragons that secure the magnificent beast in place.

‘I do not believe that since the days of Heliogabalus, there have been such magnificence and luxury. There is something effeminate in it which is disgusting. One spends the evening half-lying on cushions; the lights are dazzling; there are perfumes, music, liquers…’

After the death of George, now King of England, in 1830 the palace was used as a royal residence by the King’s brother, the Duke of Clarence, who became William IV, and then by his niece Queen Victoria. The Queen soon left the extravagance of the Royal Pavilion, preferring the seclusion of her residence on the Isle of Wight, and stripped the palace of all its furnishings and most of its fittings which were then dispersed among other royal palaces, including Buckingham Palace. Recognising that the building was of historic importance, and the significant role it could play in the town’s economy, the enlightened municipal patronage purchased the estate for civic use, cementing it as one of the earliest historic buildings to be used by a local authority.

Since its acquisition by the municipality the repair and restoration of the building and its interiors has seen the palace returned to its original glory, culminating in 1863 when Queen Victoria reappropriated the major fittings and furnishings. Thankfully, the succession of monarchs has continued to return the fittings and objects, and as I stand here today marvelling at the grandiose interiors and spectacular architecture, I imagine the Pavilion looks just as magnificent, as it did in its heyday during the reign of its creator George IV.

The queerest of all the queer sights
I’ve set sights on;
Is the what d’ye call’t thing, here,
The Folly at Brighton

The outside – huge teapots,
All drill’d round with holes,
Relieved by extinguishers,
Sticking on poles;

The inside – all tea-things,
And dragons, and bells,
The show-rooms – all show,
The sleeping rooms – cells.

But the grand Curiosity’s
Not to be seen –
The owner himself –
An old fat Mandarin.

I hope you enjoyed visiting the inimitable Royal Pavilion with The Sunday Londoner. Please do leave a comment below, I’d love to hear from you! Have you ever visited this incredible palace by the sea?