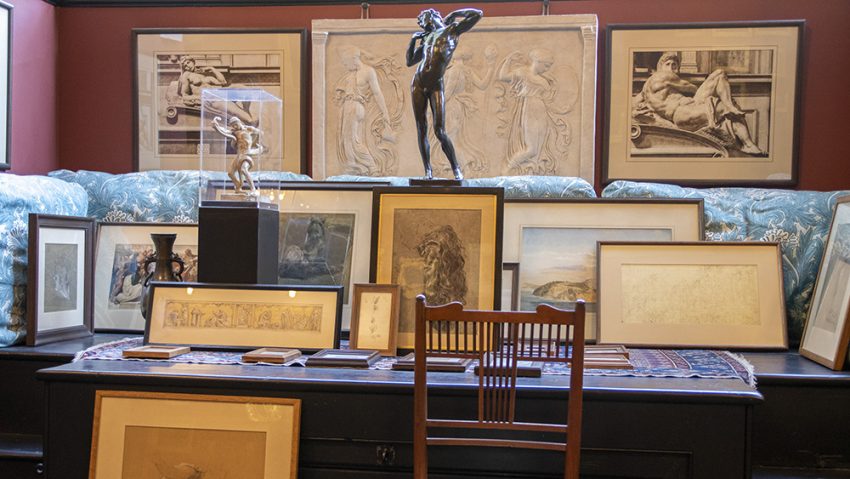 Moving to England during one of the country’s many pandemic lockdowns – number three I believe this particular one was – presented a great deal of frustration and unrest for this wandering soul. One of the most exhilarating aspects of moving to a new city or country is the delightful pleasure of exploration and discovery. Unfortunately, I neither discovered nor did I explore. For perhaps the initial six months, give or take a month, (who among us was counting!) my immediate vicinity, including some very picturesque parks and neighbouring streets, was my playground. Of course, when you live somewhere new, every detail becomes a delight; simple brickwork, ensconced in place for centuries and seemingly quite ordinary to those who pass by daily, transforms into something novel and rather magical. The deep red terracotta bricks adorning a myriad of London’s Victorian buildings somehow sets one’s heart on fire. With fresh eyes, how exquisite everything becomes.

Yet, although the ordinary becomes quite extraordinary, I craved to see what I knew lay further beyond my lovely west London neighbourhood. There were wondrous treasures to be sought, and I wanted desperately to feast eyes upon them all. Once lockdown began to ease, we ventured further afield, slowly and eagerly working our way through my every growing Must Visit list. Yet there was one elusive place, a mere 7km from my house, that evaded me for more than two long years.

Leighton House, nestled comfortably amongst other majestic architectural delights in a quiet leafy street in London’s Holland Park, was my Holy Grail. I first become acquainted with the house from a friend back home in Australia who urged me to visit as soon as I could. I was assured of its artistic worth even before I knew of its famous artistic creator.

Long before Frederic Leighton was known as Lord Leighton, the painter was an artist and sculptor, belonging to the established group of artists known as the Holland Park Circle who lived in the west London neighbourhood close to Leighton House.

Yet, for all his burgeoning artistic accolades and the esteemed respect granted to him from his intellectual peers, Leighton was, despite his outward social standing and his constant involvement with his fellow contemporaries, a deeply private man. His true character remained a mystery, even to those who knew him well. As the painter’s artistic career flourished, he longed to create a house, completely from scratch, to facilitate the needs of his studio space and to display his envious collection of antiquities and artworks. A sacred place where he could paint, entertain his exclusive circle of artistic friends, and most importantly, a private sanctuary where the artist could retreat from the outside world.

However, Leighton’s desire to build and design his own home had very little, if anything, to do with the usual practicalities of building and owning one’s own house, and everything to do with his need for the house to become an extension of his artistic practice. Leighton embarked on the design and construction of his new dwelling with the aid and guidance of architect George Aitchison, who despite his extensive experience gained from his family’s practice of building wharves, warehouses and railway works, had designed no domestic buildings at all.

Since his return to England, after travelling for some years abroad in North Africa and Italy, Leighton had been living in rented accommodation in Bayswater, only a stone’s throw from what would become his first and final owned property in nearby Holland Park. After a visit from bailiffs seeking unpaid taxes from his then landlord and threatening to remove Leighton’s own furniture as payment, the artist wrote to his mother in 1862 stating ‘I wish I had a house!’, thus giving urgency to what had evidently been a long-held desire.

Leighton’s travels throughout continental Europe and North Africa were motivated as much by architectural study and fascination with symmetry and balance as they were by painterly concerns. In 1858, while in Rome, Leighton met the American sculptor Harriet Hosmer who later recalled how she and Leighton discussed the matter of home, describing in minute detail the house he would create, confiding that he would build it ‘as soon as I am able to pay for it’.

“He built his house as it now stands for his own artistic delight. Every stone of it had been the object of his loving care. It was a joy to him until the moment when he lay down to die”.

Leighton’s sisters in a letter to The Times, 26 January 1899

Leighton House is inextricably linked to the life of its one and only occupant, Frederic Leighton. Even now, more than a hundred years after his death, the house, with its many extensions and revisions, still has only one bedroom. Brimming with fine and decorative art the house evolved in tandem with the artist’s own career. Relatively modest in its first incarnation, the house was completed in 1866 just two years after Leighton became an Associate of the Royal Academy. In 1878 Leighton was appointed President of the Academy and his house continued to evolve until his death, eventually becoming his extraordinary private Palace of Art.

“What I admire in him is that he never ceases to strive for perfection even in the minutest details; and I admire this all the more because he is in a fair way to be spoilt by attention and flattery”.

When I first heard about Leighton House, I presumed it would be one of the first in a long list of wonderful places that we would visit in our newly adopted city. Yet despite its proximity to our home and the eventual relaxation of lockdown, our visit was delayed even further. Leighton House was temporarily closed for approximately two years following the major Hidden Gem to National Treasure redevelopment project, which instigated the important recovery and restoration of the original architecture lost in later additions. Long after Frederick Leighton’s death in 1896 the house was bombed twice during the Second World War and underwent several unsympathetic and unappealing changes.

With a new and fascinating city to discover we found a myriad of sights and places to delight, yet Leighton House remained a constant mirage lying in wait at the back of my mind. Set to reopen in spring 2023 the restoration work was completed well ahead of schedule and Leighton’s Palace of Art was finally open to all in October 2022. I swiftly purchased tickets for the opening weekend!

The entire complexion of the house remained as it did during the artist’s day, yet the rather unsightly modern additions had been removed to reveal the timeless beauty that lay beneath. The interior of the home is as beguiling as it was when Leighton filled its every aspect with exquisite furnishings and intricate artworks. However, what lies beyond the building’s entryway is nothing less than awe inspiring.

Major restoration was undertaken on the west wing of the house, which later became known as The Arab Hall – surely one of the most breathtaking interiors in all London. A visit to Algiers in late 1857 was the catalyst for a lifetime love affair with Eastern antiquities and arts. The artist later wrote ‘this visit made a deep impression on me; I have loved “The East” as it is called, ever since’. A decade after his visit to Algiers, Leighton sailed down the Danube from Vienna into the Black Sea and then on to Turkey, stopping first in Constantinople (Istanbul). Leighton’s love and admiration for Islamic tiles grew feverishly with each new journey, and the following year, in 1869, while travelling through France, Leighton met the diplomat, explorer and linguist Richard Burton in Vichy when Burton was about to embark on a journey to Damascus as British Consul.

To add to his growing collection of antique tiles and artefacts it appears Leighton asked his new friend to source for him anything of significance during his trip. Despite Burton’s enthusiasm at the prospect of unearthing such treasures the trip was less than fruitful. In 1873 Leighton himself travelled to Damascus and with the help of the Rev. Dr William Wright, an Irish Presbyterian missionary and amateur archaeologist, they uncovered many rare and exquisite plates, ceramic tiles, and long-necked jars. Because of this discovery Leighton was able to lay the foundations of his fine collection.

I have seen images of The Arab Hall online and in books, however, as is often the case with tangible three-dimensional objects or places, nothing can quite compare to the visual treat that awaits. The house, as you enter now via the Entrance Hall and the Library, is Victorian artistry at its very best. Intricately decorated, one’s first impression as you enter the premises is pure delight. The Entrance Hall is refinement personified with deep crimson velvet embossed wallpaper and sophisticated artistic details adorning every surface. Though not overtly so, Leighton House exudes a masculinity that at once hints at the occupant’s symbiotic relationship with his home. Both Leighton himself, and his beloved creation, coexist in perfect harmony with each other. It is near impossible to imagine one without the other.

Beyond the library lies arguably the artist’s greatest work. Constructed in Arabesque style the west wing extension of the house known as The Arab Hall is a superfluity of treasure and is adorned with thousands of vibrant and highly decorated Islamic tiles in rich shades of blues and greens. The entire space, with its elongated golden dome, is suffused with the rich, jewel-like colours of the Islamic world. Every inch of the Hall is embellished with glistening mosaic work and gleaming turquoise tiles which, despite the absence of natural light, radiate underneath the sparkling golden glow that resonates from the multitude of reflected surfaces above.

Since moving to the UK, I have been fortunate to visit some of England’s most beautiful Manor Houses, both here in the nation’s capital and further afield in the surrounding countryside. Each place has its own unique characteristics, reflective of the era, place, and the home’s original inhabitants. Yet nothing has yet compared to the opulence and sheer artistic dedication and execution of Frederic Leighton’s Arab Hall. This is artistry on a heroic scale. During the collection of his antique Islamic tiles, amassed over many years, both prior to and during the Hall’s construction, Leighton showed no frugality in his quest for quality and artistic integrity.

The final parts of this substantial jigsaw came via yet another source, Caspar Purdon Clarke, who would ultimately become the Director of the South Kensington Museum (now the Victoria & Albert Museum). During his directorship at South Kensington, Clarke was commissioned to travel to Greece, Turkey, and Syria to collect ‘art objects’ for the museum. He later wrote:

“Before I started Leighton asked me, if I went to Damascus to go to certain houses and try to effect the purchase of certain tiles. I had no difficulty in finding my market, for Leighton, with his customary precision, had accurately indicated every point about the dwellings concerned, and their treasures. I returned with a precious load, and in it some large family tiles, the two finest of which are built into the sides of the alcove of the Arab Hall. Leighton made no difficulty about the price and insisted on paying double what I had given. He never spoke of picking things up cheap and scouted the idea of ‘bargains’ in Art Objects’.

I hope you enjoyed visiting Leighton House with The Sunday Londoner. Please do leave a comment below, I’d love to hear from you! Have you ever visited this incredible place, or perhaps another of England’s great artistic homes

12 thoughts on “Leighton House – A Quest for The Holy Grail”